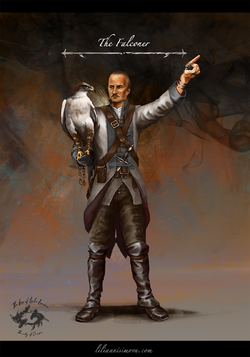 The Falconer is a Bondsmage from Karthain in service of the Gray King. He assisted the Gray King in his scheme against Capa Barsavi and during that scheme came on the wrong side of the Gentlemen Bastards, of which he helped kill three and was later tortured by the remaining two, with the intent of leaving him mad and unable to practice sorcery.

The Falconer is hired by the Gray King as a violent tool for revenge upon the Camorr nobility. He is the second main antagonist of the first book. The Falconer has a falcon named Vestris who hunts for him, and he is linked with the animal by a powerful spell. The Falconer helps to kill the Garristas of Capa Barsavi and the members of The Gentlemen Bastards Calo, Galdo and Bug.

The bondsmage was arrogant and felt victorious in every way, but he was lured into a trap by Locke Lamora and then tortured by the Gentleman Bastard and his friend, Jean Tannen. Once Jean and Locke exacted revenge on the Falconer by cutting out his tongue and his fingers, leaving him half mad with pain, they gave him to the authorities of Camorr to take him back to the city of bondsmagi, Karthain.

In The Republic of Thieves we learn that the Falconer's mother is Patience, one of the leaders of the Bondsmagi. It is rare that the offspring of magic user are magic users, and the Falconer was one of these. His father died when he was young, leaving him to be raised by his mother. In an attempt to connect with him, Patience gave him his true name. This was a terrible thing, as knowing someones true name allows them to have power over them. The Falconer resented, then grew to hate his mother because of the power she held over him.

The Falconer was a speaker for one of the factions of the bondsmagi. He believed that magic should be used to rule humanity. However, his mother believed that such a use of magic would call down the doom of the Eldren. After the destruction of the Black Iris faction at the end of Republic of Thieves, the Falconer is the only one still alive.

After the Bondsmagi disappeared, Patience once again visited her son. She revealed that she caused him to go mad after his mutilation, and left him behind to live out his life without his tongue, fingers and gifts. However, the Falconer used dreamsteel to create new fingers and a new tongue. With his magic restored, he possessed a murder of crows and used them to murder his mother. He then leaves the city, to continue his objectives of ruling humanity, and gaining revenge.