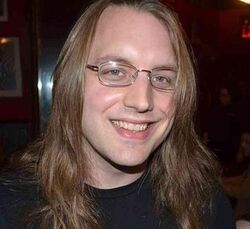 Scott Lynch is the author of the Gentlemen Bastards series.

'The Lies of Locke Lamora' was Lynch's first novel, released in August 2004. Since then he has released two more books in the sequence: 'Red Seas Under Red Skies', and 'The Republic of Thieves'. Released in 2007 and 2013 respectively.

"With every book in the sequence I have attempted to cover what you might call a different general situation: The first book was a revenge caper, the second book was more of a heist, the third was politics and romance, and the fourth book will introduce war and espionage into the mix. It's always the same characters getting into trouble but the backdrop changes." - Scott Lynch (Scott Lynch: Audible Sessions, 2016)

In addition to being a writer, Scott Lynch is also a volunteer firefighter, certified in both Minnesota and Wisconsin.