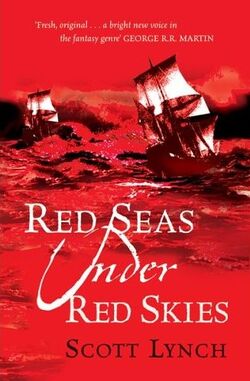 Red Seas Under Red Skies is the second book in the Gentleman Bastard series written by Scott Lynch, and the sequel to The Lies of Locke Lamora. It was first published in 2007.

After their ill-fated exploits in their home city of Camorr, Locke Lamora and Jean Tannen have made their way to Tal Verrar, where they hope to execute a brilliant scheme to rob the world's most heavily guarded gambling house.

Retrieved from "https://camorr.fandom.com/wiki/Red_Seas_Under_Red_Skies?oldid=5135"
Community content is available under CC-BY-SA unless otherwise noted.