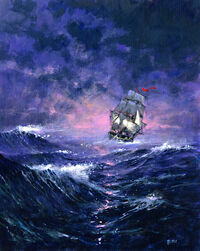 The Red Messenger was the ship which Locke Lamora and Jean Tannen was given by the Archon of Tal Verrar to travel to the Ghostwind Islands and raise hell on the Sea of Brass. Unfortunatly the ship encounters a storm and is badly damaged, and the Sailsmaster dies of an heart attack, leaving Locke and Jean alone with the crew. The crew soon raises up in mutiny and Locke and Jean are but on a boat and left a drift to their own fate.

Not long after the Red Messenger encounters the Poison Orchid and is borded and the crew taken captive. The Red Messenger is therafter escorted to Port Prodigal and sold.

Retrieved from "https://camorr.fandom.com/wiki/Red_Messenger?oldid=5076"
Community content is available under CC-BY-SA unless otherwise noted.