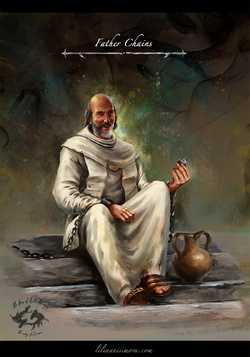 Father Chains was the founder of the Gentlemen Bastards and like a father to his protegees.

It is suggested that Chains originates from a village outside Camorr named Villa Senziano and resided there until he joined the Duke’s blackjackets at the age of twenty. However, he was forced to leave the army after catching a wasting fever. What entailed until he became a priest is vague, though it’s likely he started thieving and conning henceforth, before finally setting up his home at the Temple of Perelandro at the age of thirty-eight.

Although the people of Camorr (bar a handful of the Right People) think Chains to be a priest of Perelandro, he is an initiated servant of the Nameless Thirteenth, the Crooked Warden. He is believed to be blind, his eyeballs plucked from their sockets, and chained to the inner walls of the sanctum, though these claims are far from the truth. He is famous throughout the Therin continent and beyond because of his supposed pious nature, and earns a fair amount from this reputation as he stands on the steps of the temple preaching his supposed beliefs.

Chains is the garrista of the Gentlemen Bastards, until Locke takes over the position some time in his teenage years or early twenties. He buys his pezon from the Thiefmaker of Camorr, requesting particular personality traits from his potential apprentices. He created the Gentlemen Bastards to uphold the second mandate of priesthood of the Crooked Warden – ‘the rich remember’. He sees it as his ‘divine duty’ to break the Secret Peace and the protection it provides the nobles from the Right People.

At some point during his years he aided Barsavi’s rise into power, earning him privileges other gangs lack.

Chains lives with his pezon in the cellar of the Temple of Perelandro. It is made apparent that he dies some point during Locke’s teenage years, though details surrounding this event are concealed as of yet.

Chains is audacious and shrewd, traits which aid his wily schemes and augment his assertive mannerisms. He has a very ‘doesn’t-take-bullshit’ edge to his personality, though he boasts nothing that could be likened to arrogance. He states his achievements in a way that is neither modest nor egotistical and his reprimands are quick, nonchalant and witty. He knows his decisions hold weight, and no one argues with him. His brusque nature and a layer of seen-it-all indifference masks any sensitivity he may have, though he appears to be far from uncompassionate.

In fact, he is very kind and protective with the young Gentlemen Bastards, helping them at every level and feeling bad for them, even apologizing at some point when he learns that Locke has feelings for Sabetha, after making him think that she was captured (which was a trap in order to test him).

He is a highly intelligent individual - self-taught, it seems - with extensive knowledge of language both written and oral, and has various contacts throughout Camorr’s underworld.

He values loyalty, and has distilled that loyalty in the Gentlemen Bastards.