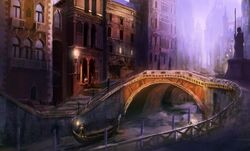 A single Capa, Vencarlo Barsavi, rules the underworld of Camorr and the hundred gangs that infest its bowels. Five years prior to the beginning of The Lies Of Locke Lamora, the underworld was ruled by thirty capa, and they were constantly warring with each other and the yellowjackets. Barsavi gradually murdered his way to power, claimed undisputed reign over every gang in Camorr, and founded the Secret Peace. Anyone who becomes Barsavi’s pezon must answer to his laws or face punishment.

Retrieved from "https://camorr.fandom.com/wiki/Camorr?oldid=5578"
Community content is available under CC-BY-SA unless otherwise noted.