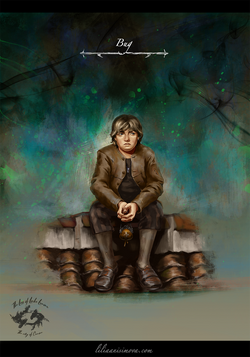 Bug was an apprentice and member of the Gentlemen Bastards before he was killed by one of the Grey King's assassins. He was the youngest member of the band, taken in after the death of Father Chains.

The details of Bug’s life before he enters the gang are somewhat vague, though it is known that he resided in the Cauldron district in Camorr. Jean’s remark ‘your mother was in an understandable hurry to get rid of you’ suggests that Bug isn’t actually an orphan, though he reveals that he was part of the Shades’ Hill gang for a time. He becomes Locke’s apprentice four years prior to the events of The Lies Of Locke Lamora and is the youngest member by at least ten years.

Bug is somewhat untamed compared to his gang brothers, impulsive and crude – a far cry from the gentlemen status his compatriots reached years ago. However, he’s eager to contribute and prove himself, often through audacious acts that inevitably lead to trouble. He seems to play the part of ‘lookout’ in the gang, wriggling into positions and clambering over rooftops that his fellow Bastards are unable to accommodate. He describes himself as a ‘lurker’.

It is unclear whether he received or receives the same style of education Locke and his compatriots were given, though they often joke about giving the boy a ‘moral education’.

Overall, he’s a cheeky, reckless, devious youth eager to keep up with his older gang mates, even if it means risking his own life.

Retrieved from "https://camorr.fandom.com/wiki/Bug?oldid=5519"
Community content is available under CC-BY-SA unless otherwise noted.